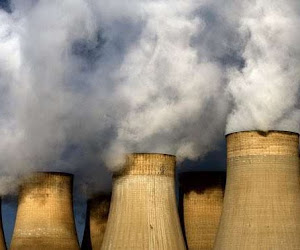 The UK’s carbon dioxide emissions have fallen to their lowest level since the 19th century as coal use continues to plummet, analysis suggests.
Emissions of the major greenhouse gas fell almost 6% year on year in 2016, after the use of coal for electricity more than halved to record lows, according to the Carbon Brief website, which reports on climate science and energy policy.
UK energy from coal hits zero for first time in over 100 years

Read more
The assessment suggests carbon emissions in 2016 were about 381m tonnes, putting the UK’s carbon pollution at its lowest level – apart from during coal mining disputes in the 1920s – since 1894.
Carbon emissions in 2016 are about 36% below the reference year of 1990, against which legal targets to cut climate pollution are measured.
Emissions of carbon dioxide from coal fell 50% in 2016 as use of the fossil fuel dropped by 52%, contributing to an overall drop in carbon output of 5.8% last year compared with 2015, Carbon Brief said.
The assessment reveals that coal use has fallen by 74% in just a decade.
UK coal demand is falling rapidly because of cheaper gas, a hike in carbon taxes on the highly polluting fuel, expansion of renewables, dropping demand for energy overall and the closure of Redcar steelworks in late 2015.
Three coal-fired power stations closed in 2016 – Longannet in Fife, Ferrybridge C in West Yorkshire, and Rugeley in Staffordshire.
UK wind power overtakes coal for first time

Read more
While emissions from coal fell in 2016, carbon output from gas rose 12.5% because of increased use of the fuel to generate electricity – although use of gas remains well below highs seen in the 2000s.
Gas use for home and business heating has been falling for a decade, thanks to more insulation and efficient boilers, but the rate of progress has stalled.
Emissions from oil also increased slightly, by 1.6%, as low oil prices and economic growth lead to more miles being driven in the UK, the assessment by Carbon Brief found.
The analysis uses energy figures from the Department of Business, Energy and Industrial Strategy, and comes before the department’s own estimates for UK carbon dioxide emissions due to be published at the end of the month.
The government has pledged that all the UK’s coal-fired power stations will be closed by 2025.
Original Article