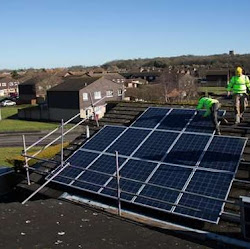 Last weekend’s sunny weather was not only good for beers, barbecues and bees, but also drove solar power to break a new UK record.
For the first time ever, the amount of electricity demanded by homes and businesses in the afternoon on Saturday was lower than it was in the night, because solar panels on rooftops and in fields cut demand so much.
National Grid, which runs the transmission network, described the moment as a “huge milestone”. The company sees the solar power generated on the distribution networks – or local roads of the system – as reduced electricity demand.

The sunshine meant that solar power produced six times more electricity than the country’s coal-fired power stations on Saturday.
Continued good weather saw solar power generate significant amounts of power on Sunday and Monday too, when it was providing around 15% of electricity generation. Demand on Sunday afternoon was also lower than on Sunday night.
Duncan Burt, who manages daily operations at National Grid, said: “Demand being lower in the afternoon than overnight really is turning the hard and fast rules of the past upside down. It’s another fascinating sign of the huge changes we are seeing in Britain’s energy scene.”
Electricity demand usually peaks around 4pm to 6pm at this time of year, as people return home from work, with demand lower still at weekends. But the early hours of the morning are usually the quietest for the Berkshire control centre that monitors the grid, so a reversal is dramatic.
Chris Goodall, the author of a recent book on how solar power is transforming energy systems, said that, counterintuitively, March is a good time for solar panels in the UK, due to the angle the sun is hitting them and because they operate better in lower temperatures.
“A sunny day between the equinoxes can now produce a peak of around 9.5GW. At weekends, when demand is low, this will frequently mean solar is producing well over 25% of the UK power need. This drives coal almost completely out of the mix, as it did at the weekend, and depresses gas use,” he said.
Goodall said that by weekends this summer, on windy and sunny days he expected fossil fuels could be providing as little as 15% of the UK’s power. That percentage could fall to zero in coming years as new offshore windfarms are completed, he said.
The solar industry hailed the landmark last weekend, and said the government had repeatedly underestimated the technology’s potential.

A spokeswoman for the Solar Trade Association said: “This milestone shows the balance of power is shifting, quite literally, away from the old centralised ‘coal-by-wire’ model into the hands of householders, businesses and communities all over the UK who want their own clean solar power.”
Solar power installations grew dramatically in 2014 and 2015 (pdf), but new capacity largely collapsed in 2016 after the government axed and reduced subsidies.
An independent report, commissioned by the STA, found the UK’s power network could handle four times more solar capacity than there was today without increasing costs for the grid. Other studies (pdf) have also concluded that even a significant expansion of renewable energy would impose only “relatively modest” costs to integrate into the electricity system.
A government spokesman said: “This government wants Britain to be one of the best places in the world to invest in clean, flexible energy. Solar power is a great success, with over 11GW of capacity installed in the last five years that’s enough to power more than 2.6 million homes with clean electricity.”