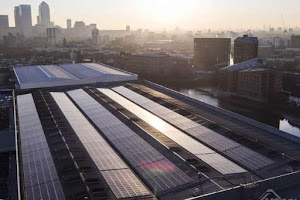 Bywaters expects the installation on the roof of its Bow facility to deliver a positive return on investment within six years.

Bywaters installed the 700MWh solar panel array on the roof of its main facility in Bow last February. The array provides most of the power needed for Bywaters’ 650,000 tonnes per annum materials recovery factory, making the company nearly self-sufficient.
“Feasibility studies convinced us of the validity of using solar panels in the UK and, we are already saving more carbon than anticipated,” Bywaters managing director John Glover said. “As well as reduced energy costs, the solar panels are enabling us to operate more sustainably.”
Set the benchmark
Bywaters expects the installation to deliver a return on investment within six years. The retrofit forms part of the firm’s ambition to reduce the environmental impact of its own operations and its customers.
The Bow facility processes 670,000 tonnes of waste from across London and exports around 470,000MWh of electricity to the National Grid - enough to power the equivalent of 100,000 homes. The company recently commenced a five-year waste collection and recycling contract with the Parliamentary Estate, with the goal to boost recycling rates and further its sustainability efforts.
“We have taken a number of decisive actions to clean up the capital’s air and believe in setting the benchmark for how businesses can carry out core processes without causing damage to the environment through harmful emissions,” Glover added.
London sunlight
The Bywaters installation joins a series of solar PV projects that use London’s sunlight to generate renewable energy.
Camden Council is teaming up with Islington Council and Waltham Forest Council to pilot a new solar project aimed at eradicating fuel poverty across the areas.
Meanwhile, London's South Bank Tower is expected to save around 11,850 kg of C02 after a 100-panel, 26 kilowatt-peak (kWp) solar PV system was installed on the roof of the newly-developed skyscraper.
And Europe's biggest ever floating solar array was recently installed on the Queen Elizabeth II Reservoir, just south of the River Thames.
By George Ogleby