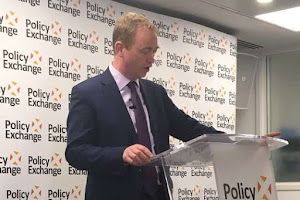 Lib Dem leader issues rallying cry for more investment in low carbon economy in a speech sharply critical of Theresa May's government
Liberal Democrat leader Tim Farron has issued a sharply worded attack on the UK government's green agenda, warning the government is backsliding on its climate commitments and calling for urgent action to spur green growth.
Farron, who was speaking this morning at the London offices of the think tank Policy Exchange, accused the government of failing to "see the business opportunity of investing in a low carbon economy" and called on the UK to lead the low-carbon transition by embracing a new era of Victorian-style infrastructure investment.

"We need to do with clean energy what the Victorians did with rail and infrastructure - to create a radical programme of upfront investment which transforms the world we live in," he said. "A collective patriotic endeavour to become energy self-sufficient, to write a chapter in Britain's history that will make future generations proud of us and keen to follow."

Farron insisted the UK should be on the "front foot" of investing in clean technology and exporting its low carbon expertise to other nations around the world, rather than retreating into an era of economic protectionism post-Brexit. "We must not squander the opportunity to be a global leader in innovation and exports to the world."
The speech was sharply critical of current policy, accusing the Conservatives of "heading in the wrong direction" by "hand-picking" favoured technologies. "They have stopped new onshore wind, undermined solar, avoided tidal, and cut the Renewable Heat Incentive," he said. "They are not planning for the long-term, they are sleep walking their way through with a short-termist approach, while those in industry look on with disbelief."

The government has repeatedly insisted it remains committed to delivering against the nation's climate commitments under the Climate Change Act, and is preparing to release an emissions reduction plan which will set out a range of new policies to boost emissions reductions across energy, heat and transport.
But despite praising the "groundbreaking" Climate Change Act - which commits the UK to cutting emissions by 80 per cent by 2050 - Farron said the time has come to up the nation's ambition. He called for a 100 per cent reduction in net emissions by 2050 and a reframing of climate goals to be in line with a 1.5 degrees scenario rather than the current two degrees trajectory.

The Lib Dem leader said his party are putting together a plan to show how such emissions reductions can be achieved - dubbed the Liberal Democrat roadmap to a Zero Carbon Britain. The strategy will include reform of agriculture and land use, increasing protections of natural forestry and peat, electrifying the transport industry and phasing out diesel cars, boosting clean heating and supporting better climate risk disclosure in the financial industry, he said.

Notably, Farron called for the establishment of a new Green Investment Bank - a British Infrastructure Bank - that will use an initial public investment of £5bn to support clean infrastructure projects in energy and housing. The pledge is similar to that made by Labour last year for a National Investment Bank to "rebuild and transform Britain".
Farron also backed plans for the UK's first tidal lagoon in Swansea Bay, and said his party would commit to a "whole programme of tidal lagoons", with up to 10 being constructed over the next two decades. The government is currently considering whether to press ahead with the Swansea tidal project, after a government review into tidal energy led by former energy minister Charles Hendry backed the scheme last month.

And on electric cars, Farron said more focus should be placed on ensuring EV charge points are rolled out as quickly as possible. "We would introduce universally compatible charging points to make it easier for drivers and incentivise demand - helping urban motorists, not just motorway drivers," he said. "Some areas of our economy are harder to decarbonise than others. Improvements in transport are within reach and we must push forward with ambitious strides."
BEIS was considering a response at the time of publish.